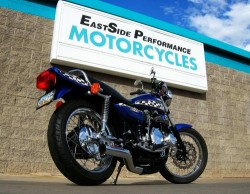 Welcome to EastSide Performance, owned and operated by TJ and Pam Jackson. EastSide Performance opened it’s door in 1981 after TJ, a longtime motorcycle mechanic and drag racer decided to go out on his own. TJ’s background in racing and his eye for quality led to a dedicated following of customers, many who are still coming in 30 years later. TJ’s philosophy has always been to do the best job possible and the business will follow. TJ married Pam in 1982 and she has been an integral part of the business since then. TJ provides the technical knowhow and runs the parts and service departments. Pam takes care of the bookkeeping and shipping as well as answering the phone and picking up bikes for service. Their son Tucker has recently become a part of the business as well. Both TJ and Pam are avid riders and rarely miss an opportunity for a good motorcycling experience.

EastSide has always been involved in the performance end of the business with TJ having set numerous National records drag racing in the seventies and eighties, culminating in a National #1 plate in 1988. He continued to drag race until the early nineties campaigning a mid seven second Nitrous injected Kawasaki. Shortly after that, the shop became involved in the high performance Harley business. It seemed that there were a lot of shops that claimed to know Harley performance but few who actually produced results. EastSide Performance purchased the 3rd Dynojet Dynamometer ever produced in 1991 and along with the help of his excellent mechanics, became to “go to” shop for Harley performance in the Phoenix area. Eastside has won multiple horsepower shootouts including multiple wins in the Unlimited Domestic V-twin class at the prestigious Brute Horsepower Shootout in Daytona Beach Florida. Their street ridden Harleys have produced over 310 Horsepower, unheard of for street legal bikes. The shop has been featured several times on American Thunder and the Speed Channel.

Today we service and maintain all makes and models of bikes. We focus on reliable performance for street riders. We don’t care what you ride, only that you want your work done right!! We offer in house machine shop services as well as tuning work on our state of the art eddy current Dynojet Dyno. While we offer services from basic maintenance and tires, we gravitate to the unusual and we are quite involved in Vintage restoration along with our other work. Our showroom has a great collection of antique bikes dating from 1908 to present.

Please login or register to add your review.